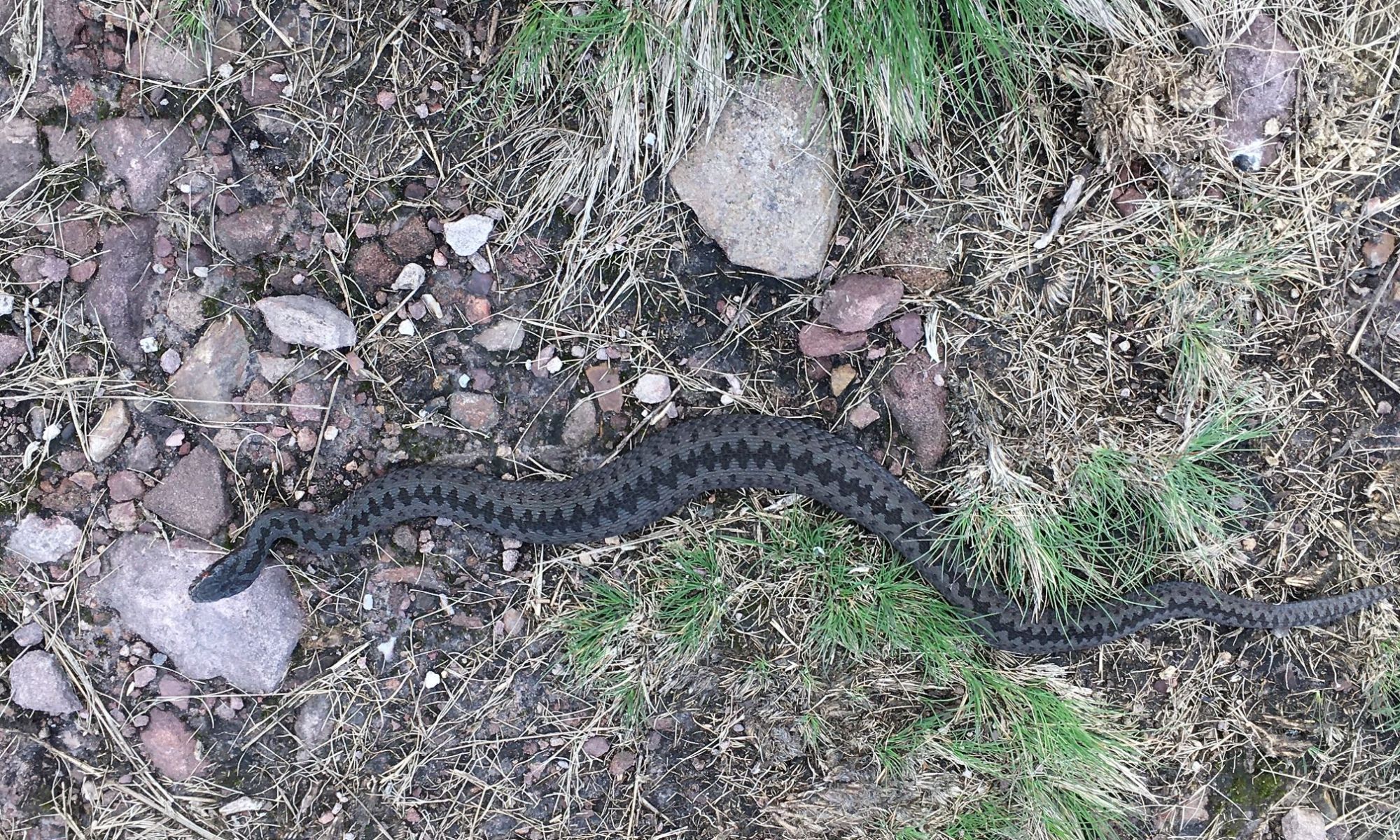 Surprise On The Moor

It’s one of our favourite walks. We were gently descending towards home in the early afternoon when the sun was at its highest and hottest.  We were lost in our thoughts and simply enjoying being there.  My wife, who was with the dog just a few metres ahead, suddenly stopped and pointed towards a stick between some tussocks of grass and stones.  As I moved closer to take a look, the ‘stick’ slowly but deliberately reared its head and looked at me.  It was an adder enjoying the sunshine. The sunbathing adder was so still and blended so naturally into its environment, that even the dog did not notice it.

It was an awesome sight and a reminder of the rich biodiversity on Exmoor.  It is fairly common to see Exmoor ponies, reasonably common to see highland cattle, it is less common, though not unusual, to see red deer, but this is the first time I have seen an adder.  They are present, but do not usually reveal themselves.

I was struck by the adder’s beauty: I was also struck by a mixture of respect and fear. Not wanting to disturb the snake’s siesta any further, I kept my distance.  We both eyed each other up for a while until I took some pictures and walked on leaving it to sunbathe in peace. There are some parts of creation and of ourselves that we rarely see and others that we would rather not see, yet without them the natural world would not be so rich and varied.

Snakes have always had a very mixed reputation in folk-lore, religion and art. They are often associated with chaos and death.  Simply looking at them can touch the fear and uncertainty of chaos and death that lurks within and around all of us.

Snakes are also associated with healing and new life.  The symbol of medical organisations, including the World Health Organisation, is a staff wrapped around by one or two snakes. This symbol resonates with two ancient stories.  The first is when the Old Testament prophet Moses was leading the people of Israel through the chaos of the wilderness towards their new home. The Israelites were being harrassed and bitten by poisonous snakes. God told Moses to erect a pole with a bronze image of a poisonous serpent: when the Israelites, bitten by snakes, gazed on it, they would live.

The second is from Greek mythology where Asclepius, the god of healing, carried a staff with a coiled serpent as a symbol of his healing powers.  So, in the ancient world, this most feared of reptiles brought healing as well as death.

Deep within creation, and deep within each of us, lies the potential for healing and chaos, life and death. The presence of the adder is a reminder that there are times when we gaze on something that we fear and are surprised to discover it can bring healing and life.