Opportunities and Challenges facing the Church 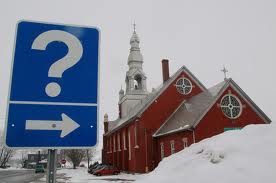 I have over a number of years (both as a Bishop and as Vice Principal of a Theological College) spoken to men and women as they were about to be ordained deacon.  Every time I find myself saying to them, ‘I cannot think of a more exciting time to be ordained.  Everything is up for grabs.’  Each time I say it, it is more true than  when I said it before.  Thinking about the present and future, I would say that this is one of the most exciting times certainly since I have been ordained.  Nothing is sure.  Nothing is clear.  Nothing is certain.  All we can depend upon is God and God’s faithfulness and that’s not a bad place to be.  When we are clear, sure and well established, complacency creeps in.

I want to give some thoughts under the headings of opportunities and challenges to stimulate discussion and debate.  Let me give a health warning.  ‘Church’ can be interpreted as meaning national church, often considered as bureaucracy,  or it can be diocese or parish church.  When we hear the word ‘church’ we will think of one of these.  And in what I say, I sometimes mean all of them or one of them.  I will clarify if you ask me.  Secondly, any statement about church can always be contradicted.  ‘Numbers are falling,’ may be one comment, but there is always a church not far away where numbers are rising.  ‘Not many young people’, may be another comment but some churches will have a particularly large proportion.  Finally the title – opportunities and challenges – we will discover are two sides of one coin.

I want to highlight 7 Opportunities/challenges.  Some are obvious, others less so. I will be brief.

Ordination of Women to Episcopate

This was originally to be debated and voted upon last July, but because the amendment from the House of Bishops may have been the downfall of the motion, General Synod (GS) decided to ask the Bishops to think again and bring it back to Synod in November.  I believe the Church has reached a stage where it is recognised that there will be women bishops in CofE (even those who cannot accept the ministry of women bishops recognise this), but the delay spins around how to make provision for those who, for various reasons, cannot accept the ministry of women bishops.  A new form of wording, put forward by a woman priest called Revd. Janet Appleby and focussing on the word ‘respect’, was widely accepted by the bishops as taking us as far as possible in embracing the wide spectrum of views.  I hope and pray that GS will accept the measure and pass it.  We do need to settle this issue and move on.  I believe that ordination of women to priesthood has released many gifts within the Church to the benefit of all and I believe that the same will happen with ordination of women to episcopate.  There is no guarantee it will get through GS: we need to pray hard.

This is an issue facing the country next year and I believe it has potential to be explosive for the Church.  The Government consultation (flawed in a number of aspects) makes it clear that this is going to be on the statute books – but who knows whether it will get as far as that?  But if it does,  how will the Church respond?   The Church views marriage as taking place between a man and a woman and I cannot see how it can move from that view, but however it responds, it needs to use language that is inclusive and non-condemnatory. It is important that the Church persuades people of the importance of marriage because of its significance in its own right and it is a form of relationship in which we believe and to which we are committed.  Again, the language in which we address this debate is very important indeed.

Society is facing crisis of identity

Of course the Church is a part of this crisis, whether we like it or not, because members of the church are also members of society.  Some of the reasons for this crisis of identity come from outside our shores as we, with many other countries, struggle to discover what it means to be part of a fast-changing global community, but some come from inside.  Let me mention 2 indicators that we are a country which is not at ease with itself.

1.Governance.  Many public institutions have lost the support and respect of wider society and politics and politicians are one (media and the church can be counted among these).  People have lost enthusiasm and trust for politics and often do not feel represented or listened to by those with power.  In general, there has been an increasingly low turn-out in elections – the general trend over the last 50 years has been downwards.

2.Tolerance.  Society is becoming much less tolerant.  Outwardly, society appears to be more open-minded and non-judgemental and tolerant than at any other time in human history.  But, in fact, society encourages intolerance, especially towards those who refuse to accept what is regarded as conventional wisdom.  People can be condemned for food they eat, way they parent their children, their view on same sex marriage (especially if they are against it) and for displaying religious symbols in public.

There can be no doubt that there is a crisis of identity.  So, how can the Church respond to this?  I am not suggesting we can expect to sort it out, but nevertheless, as Christians we have something to say and offer in the areas of well-being and human flourishing.  The Olympics and Paralympics over the last summer have given a glimpse of what is possible – how can we, as Church, inspire a generation?

In 2010 celebrated 40th anniversary of synodical system of CofE.  Much for which to be thankful over those 40 years, in particular in the way that the synodical system has incorporated the voice of the laity into the governance of the church.  But synodical system is now creaking.  One of the indicators of this is the difficulty in getting members to stand.  What are the problems? First, the adversarial style of debate (ordered like parliament) does not encourage quieter voices to join in debate.  Secondly, the bureaucracy developed to support synodical system is now dominating it.  Furthermore (and this is not just a CofE issue but is true of wider society) we are developing a defensive bureaucracy whereby we need more lawyers and HR personnel to keep us going in case we encounter a problem.  I am not being critical of lawyers and HR personnel per se, who may have saved the church a lot of money, but there is something not right when they take up an increasingly large amount of our energy and budget.

Another challenge is relationship between the CofE and the Anglican Communion,  one of our most significant resources in our life as Anglicans.  Relationships with partner dioceses have had a massive impact, especially for us in this diocese with our overseas’ links.  We have learned enormous amount about commitment, perseverance and persecution.  There are many examples of how our communities here in Rochester have gained from the Church in other parts of the Communion.  For example, two of our church schools sent students last summer to one of our link dioceses in Tanzania and their experiences in Tanzania have had a profound effect upon them. One of our parishes which has developed a link with a parish in another diocese has involved local schools and the local council signing a twinning agreement.  As a result of this link partnership, the parish in Rochester diocese has grown closer to its own community.  It is an enormous comfort and support to overseas’ partners, especially those facing persecution who realise they are not alone because of the prayerful support from brothers and sisters across world.  This is particularly true of our link diocese of Harare.

This is the slogan of the Olympics and Paralympics.  It should be the Church’s.  Many parish churches do inspire and encourage, but church is not generally seen as inspiring and encouraging – how can we change perception of church?  It can happen.  The uncomfortable truth is that martyrdom is often the way this does happen!