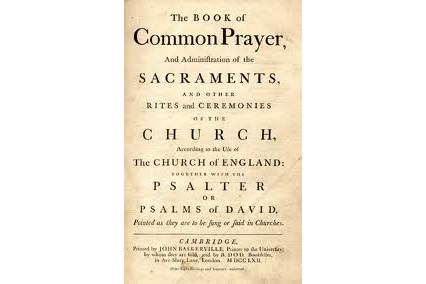 Twentieth century historian Stanley Bindoff wrote that the King James’ Bible (KJV), the Book of Common Prayer (BCP) and Hymns Ancient and Modern (A&M) formed a ‘splendid, trilogy with which the Anglican Church has endowed the English speaking world.’ Last year was the four hundredth anniversary of the KJV and one hundred and fiftieth of Hymns A&M.  This year we celebrate the three hundred and fiftieth of the BCP.

The 1662 BCP didn’t suddenly appear on scene, but was over one hundred years in gestation, beginning its public journey in 1549.  It didn’t simply emerge from the peace of a scholar’s study, but it evolved amidst one of the most turbulent and bloody periods of English history.  Its main architect, Thomas Cranmer, was burnt at the stake seven years after launching his prayer book.  The Prayer Book was outlawed, along with Bishops I hasten to add, during the Commonwealth years and the BCP as we know it was finally established under the Act of Uniformity of 1662, nearly a century after Cranmer’s death.

But let’s rewind.  The rationale for a new prayer book became apparent during the English Reformation.  A newly emerging English Church needed new liturgy in English which would enable fuller congregational participation.  Hitherto the liturgies were mainly in Latin and designed for the clergy: the new Prayer Book (PB) reduced the eight monastic offices to the two public offices of Morning and Evening Prayer.  Praying the offices was removed from the exclusive use of the clergy and placed into the hands of the laity.  But writing this new liturgy created real problems and there was much opposition.  There were objections from all quarters. Cranmer must have been pulling his hair out on occasions so much so that, in exasperation, he accused those opposing the introduction of the new liturgy of being ‘peevish, perverse and obdurate.’  Yes, the BCP was new once and faced the same problems as other new liturgies being introduced.

Writing the new PB showed the genius of Cranmer for writing vernacular liturgy.  But the PB did not simply provide words for church services but had embodied within it the struggles between church and state (which involved at least one Bishop of Rochester losing his head) as well as the wider cultural struggle that was taking place within England at the time. The BCP became an expression of identity of the Church in England as well as helping shape the identity of the wider society.  One could say that BCP was written in blood, sweat and tears: it is more than just a PB for the Church in England, but it is also an important cultural statement of its time crafted by somebody who was able to get to the heart of the struggles, because he was deeply involved in them.  The strength and beauty of the BCP is that it is so embedded in both Church and Society and it articulates the doctrine of the CofE in a way that was pointed and poignant.  Within its words are represented not simply services for the Church, but also something of the society in which those services take place.  It embodies in a beautifully balanced and subtle way both worship and mission.  It was a book that not only provided services for the Church, but was also taken to heart and was loved by the people.  It is a hard act to follow.

Yet follow it we must.  Both readings tonight stress the importance of being able to communicate God’s message with those around us, both inside and outside the culture.   Ezekiel is facing a rebellious Israel and God makes it clear that his voice needs to be heard when he is ready to speak to his people.  God makes it clear to Ezekiel that he expects him to speak clearly when he, the Lord God, gives Ezekiel the words and the voice to do so.  In the New Testament reading, from the letter to Timothy, St. Paul says that it has been laid upon him to proclaim the message to those new to the faith and new to the culture in which it has been traditionally proclaimed.  We, too, are called to proclaim the Gospel both inside the Church in our worship and outside the Church in our mission: and the two are related.  Words have no power unless they have the commitment and conviction of the people who both speak and live them, but we need to be able to share and communicate the Gospel in ways that will  both speak to the hearts of people  and also hint at the mystery of faith laying behind it.

Contemporary liturgies, including Common Worship – and we have some very good contemporary liturgies – have a strong eye to meeting the needs of Church-goers but not such a strong eye on society outside.  They are weaker on mission because they are not so immersed in culture.  The BCP, on the other hand, was more immersed in the struggles of the society of its time, particularly by the way it caught the imagination of culture through language, and it wanted to express the worship of all the people, rather than simply of church goers.

We are called to speak to the hearts of people in both our worship and mission and in that speaking we need to point to the mystery of faith.  The BCP has something very important to teach us about communicating the Gospel to and from the very heart of culture.  The challenge we face today is how we continue to do that in the very different and distinctive culture of the twenty-first century.  The BCP will always be there as a foundation, but the baton is being handed to the Church.  Where and how do we run with it?