The Priorities of Jesus Christ and the Music of Faith

People were attracted to Jesus like iron filings are attracted to a magnet.  He was particularly popular with the ordinary person in the street who didn’t have much by way of money or education.  He was even more popular with those that society in general had turned its back on: the poor and destitute, foreigners and immigrants, those considered sinners such as prostitutes and tax collectors. Today’s readings highlight two reasons for Jesus’ popularity which were part of his character and priorities in his ministry.  First, he could speak to the heart in ways ordinary people understood and found attractive.  Secondly, he wasn’t afraid to challenge the political and religious establishments especially when they looked down upon and excluded people. Let’s look at these two priorities of Jesus: his ability to speak to the heart of ordinary people and his willingness to challenge the establishment.

In the letter to the Corinthians, St. Paul makes it clear that the Good News of Jesus Christ questions traditional wisdom and understanding which have become stumbling blocks, especially to those not schooled in traditional ways:

I will destroy the wisdom of the wise, and the discernment of the discerning I will thwart….for God’s foolishness is wiser than human wisdom, and God’s weakness is stronger than human strength.

Paul was addressing these words as encouragement to his congregation, some of whom were illiterate slaves, looked down upon by the political and religious establishments in Corinth.

In the Gospel, Jesus, enraged with the way that the Temple was being misused, cast out the money-changers and merchants trying to make a quick buck, telling them to stop turning God’s house into an exploitative bazaar.  This action made the religious authorities more determined than ever to do away with Jesus.

A desire to speak to the heart of ordinary people, especially those looked down on and a willingness to challenge the establishment.  As well as being priorities of Jesus, they also reflect the essence of a musical activity we do Sunday by Sunday – the singing of hymns.  The hymns that we enjoy become great friends.  They speak to the heart and take us back to particular occasions in our lives. They can lift us up and encourage us and they can bring great comfort at times of difficulty and sadness. 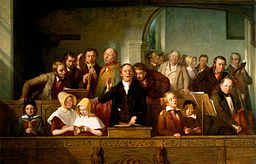 The popularity of hymns isn’t confined to church-goers.  Many who don’t come to Church are still drawn to hymns that they have known and loved, for example, BBC’s Songs of Praise is still flourishing after nearly 60 years; ‘Jerusalem’ continues to be sung at the Last Night of the Proms; at Welsh Rugby Internationals ‘Guide me, O thou great Redeemer’ will always be heard and a regular at England international matches is the Spiritual, ‘Swing low, sweet chariot.’

Hymns have had a difficult relationship with the Church, because Church authorities have often felt threatened and undermined by them.  They first found their way into the Church, not because the authorities wanted them, but because the people wanted them.  When hymns first appeared back in the second century, the Church resisted them because they were said to be circulating heretical views.  But congregations loved them because they gave the people a voice in expressing their faith.  Usually everything was led by those up front – hymns widened the participation.   Eventually the Church reluctantly allowed them provided they promoted orthodox beliefs.

Hymns belong by nature to the people of God, and more to the laity in the nave than the clerks in the choir…. A good hymn book is necessary an endeavour in high democracy.

You can see why hymns were popular with the people but a threat to the establishment.

While hymns were accepted and flourished in the Methodist, Baptist and Congregational Churches, they were only grudgingly accepted in the Church of England.  There is no provision for or even mention of hymns in the 1662  Book of Common Prayer, with the one exception of ‘Come, Holy Ghost, our souls inspire’ which appears in the ordination services. Although hymns were sung in some churches, up until 1819, less than 200 years ago, a vicar could be taken to a church court for allowing them to be sung.  This last happened in 1819 in Sheffield, but the judge in the court recognised that hymns had become an important part of people’s spirituality and refused to ban them.

Hymns were also recognised as expressions of people’s beliefs and theology as well as their devotion. This was pointed out eloquently by a Congregational Minister in Birmingham who wrote,  ‘Let me write hymns of the Church and I care not who writes the theology.’  Hymns often express what people do believe, while doctrine expresses what the Church think people should believe.

Another great virtue in hymns, already mentioned, is that they are often sung and loved by those who may not darken the doors of church. Singing them keeps faith alive in the world.  I have already highlighted ‘Songs of Praise,’ rugby matches and the last night of the Proms. There’s much more. Back in the 18th century, Charles Wesley, one of the most famous hymn writers of all, composed hymns which could be sung outside Church to jaunty folk tunes.  There are moving stories of people’s lives being turned around by singing them.

Between the seventeenth and nineteenth centuries, groups of singers and musicians who made up the choir in Church on a Sunday, also sang in the pubs on a Saturday. By sharing songs and music between the two institutions, they were ensuring that the Word of God was out and about in the streets and lanes.  Sadly, today, there are few hymns that are sung by people both inside and outside of the Church and this is a great loss.  Where are our hymn writers and composers that can fill this gap?

St. Augustine wrote, ‘The one who sings, prays twice.’  Hymns engage with so many parts of our lives.  They deepen our spirituality, as in the hymn ‘Rock of ages cleft for me’ which is part of this morning’s service.  They heighten our discipleship, as in ‘My song is love unknown,’ also part of this morning’s service.  They sharpen our social conscience – look at GK Chesterton’s hymn ‘O God of earth and altar’ which has the line ‘Our earthly rulers falter, Our people drift and die.’ Look, too, at Henry Scott Holland’s ‘Judge eternal throned in splendour’ which asks God to ‘Purge this realm of bitter things’.  Both are in your hymn book, the New English Hymnal.  Hymns can also encourage the Church to keep its eyes focused on the world as in the Iona hymn of John Bell, ‘Will you come and follow me if I but call your name.’

Sermon for Ely Cathedral as part of their Lent Series ‘Music of Faith, Songs of Scripture on 4th March, 2018.