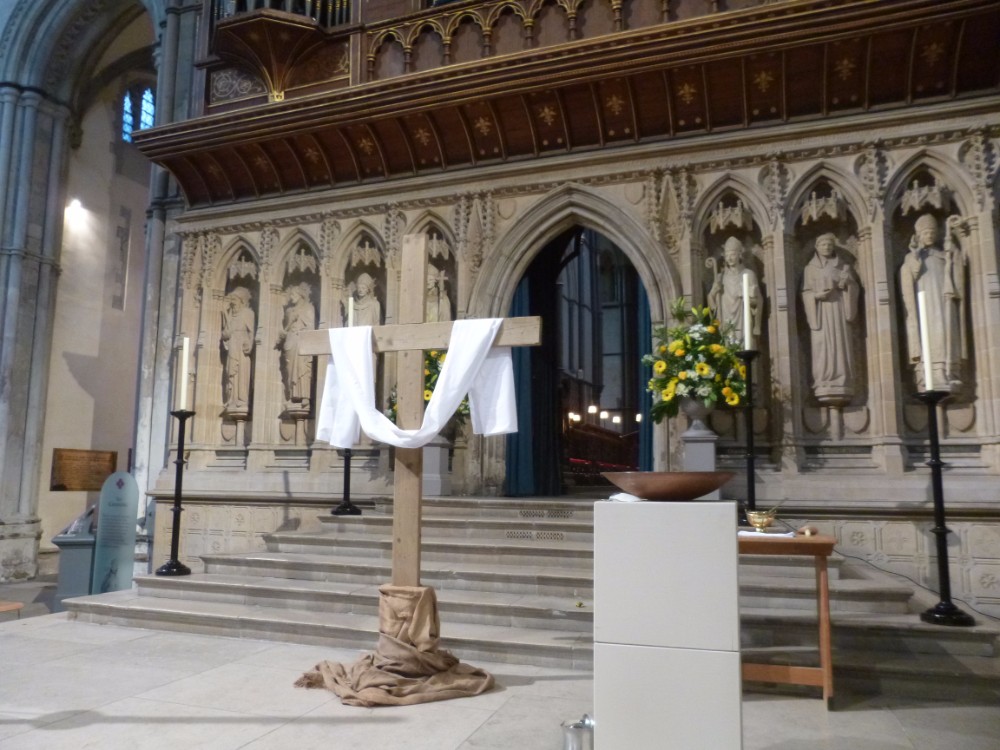 That great acclamation will be echoing around the world today in countless languages as Christians celebrate the resurrection of Jesus Christ.  They will already have said these words in Australia and New Zealand. They will have a particular poignancy for those Christians persecuted and chased out of their ancestral homes in Syria and Iraq. They will feed the faithfulness which gives energy to the dwindling numbers of Christians in Palestine, the land of Jesus birth and life.  Hopefully they will bring comfort to the families of the 147 students, the majority of whom were Christians, slaughtered in the attack on Garissa University in Kenya.  They will bring hope to our sisters and brothers in our link dioceses in Tanzania who are facing the worst drought in many years.  Bishop Given, bishop of our link diocese of Kondoa which has been particularly badly hit, was here, in the cathedral, speaking just a few weeks ago. They brought terror and amazement to the women who went to the tomb on that first Easter morning.  What do those words, and the reality that lies behind them, bring to us, here today? 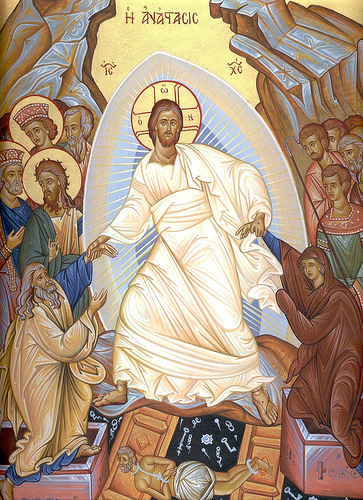 For 2000 years people have struggled to describe the resurrection and what it means.  The Orthodox Christians of the East describe their faith in the painting – or to use the correct term ‘writing’ – of icons.  But the orthodox tradition is that the moment of Jesus’ resurrection could not be depicted because it is beyond words and images.   And so icons of the resurrection show, not the moment of resurrection, but the effect of God’s action on history and they do this by showing more than a historical event.  They depict the scene of Jesus stamping over the gates of Hell and bringing Adam and Eve out of the realm of death into his new light-filled presence.   This is what lay behind the phrase in the Creed ‘he descended to the dead’ which we shall be saying in a few minutes.  ‘Bringing people out of the realm of death into Christ’s new, light-filled presence’ is not a bad description of the effects of the resurrection….but the resurrection itself cannot be described or depicted.  Human language and art cannot hold or contain such an event, just as the women at the tomb were completely disoriented by what they experienced.

Of all the Gospels, I believe that St. Mark, whom we heard today, provides the most vivid account of the resurrection – the disorientation, the terror and the amazement.  Also, the encouragement (not the command but the encouragement) to the followers of Jesus Christ that Jesus is going ahead of them to Galilee and that they will find him here.  These were the words spoken to the women:

But go, tell his disciples and Peter that he is going ahead of you to Galilee, there you will see him, just as he told you.

And so, what do those words, the words that are echoing around the world to greet the resurrection and the reality that lies behind them, bring to us, here today?  To answer this, we need to ask what this event brought to those first followers of Jesus.  It released the full potential of the disciples, enabling a group of mainly uneducated fishermen and tradesmen, and the women who also followed Jesus, to go to places and people they would have considered inconceivable before the resurrection.  They were no longer held back or restricted because of their background or their family upbringing or the expectations placed on them by society or the fears of how others would regard them or think about them and so they were able to grow and flourish in ways they could not possibly have imagined. The result of this is that they made a difference to the world, both the world in which they lived and to our world today.  Of course, it wasn’t all a bed of roses.  There were challenges, there were struggles, there were disagreements, there were mistakes and for some there were persecutions and martyrdoms.

So it is with us today.  Words and images cannot contain or control the moment of the resurrection.  The Risen Christ is to be found, not in some distance experience, but in our everyday lives….at work, at school and at home and we are encouraged to look for the one who always goes before us and calls us forwards.  As we seek him, the disorientation, terror and amazement experienced by the women at the tomb, may be our experience too.  But so too will be that sense of liberation, liberation from all that holds us back from growing and flourishing in ways that we cannot possibly imagine.  Our lives may not be as dramatic, high profile or as public as the first followers of Jesus, but the resurrection of Jesus Christ is for each one of us here as it was for the earliest followers of Jesus Christ 2000 years ago…..and like them, we will make a difference to the world around us.