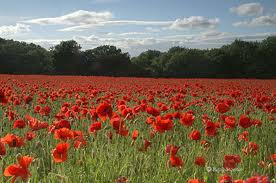 Some years ago I visited the French town of Verdun, scene of some of the bitterest battles in the first world war.  It was from the battles around Verdun that the unknown soldier, buried at the Arc de Triomphe in Paris, was selected.  As one goes into the lush, green, wooded countryside outside Verdun, it is difficult to imagine that, over 90 years before, this land, bombarded by shells and scarred by trenches, looked like the surface of the moon, without a tree in sight.  But the whole area has an atmosphere of solemnity – no camping, no picnics, no fires are permitted as a recognition of the what happened all those years before.  In the middle of this forest is a museum commemorating the battles.  The museum is so well put together.  Trenches are reconstructed.  Film footage of some of the skirmishes are continually shown. There are pictures of the area as it was before 1914 and as it was after 1918.  But there were two exhibits that were particularly moving.  First, pictures of a small village that was totally obliterated during the bombardment.  All that remains of that village are parts of the school bell and bits of books containing children’s writing that survived the onslaught: whether the children survived is not clear.  The second exhibit – and I would like to focus especially on this – is a small metal statue, no more than 9 inches tall, depicting a soldier sinking in the mud of one of the trenches while a comrade, kneeling on the side, is desperately trying to pull him out using his rifle – an instrument of death transformed into an instrument of life, a transformation which lays at the heart of the life and teaching of Jesus Christ.  Written on the base of the statue, in French, is the inscription, ‘To our heroic fathers.’  It was made as an act of gratitude by the children of those who gave themselves in these battles.

The museum did not glorify war in any way.  It made the visitor aware of the grime, the filth, the agony, the death and the waste.   It also made the visitor aware of the heroism of those who fought and the camaraderie of the soldiers.  That statue, ‘to our heroic fathers’, somehow summed up what was happening and was a beacon of hope.  It was the heroism and camaraderie of the soldiers that was to be commended and how instruments of death can be transformed into instruments of life.

Today warfare is very different.  Of course, there are occasions when soldiers have to fight in the traditional way, as we see in Afghanistan where many young men and women are being killed and injured, but generally warfare is waged from behind a computer screen.  Some weapons, particularly drones, are fired and controlled thousands of miles away from the scene of the battle, from the safety of a bunker.  The controller fires the weapon, sees the destruction it wreaks, then, when his or her shift is over, will go home to tea. Despite this, we still depend upon the heroism of our service personnel who risk themselves for the sake of others, and it is their sacrifice that we remember today.  It is important that we remember.  Above the entrance to the museum of the concentration camp at Dachau near Nuremburg are the words, ‘Those who cannot remember the past are condemned to repeat it.’ …….and who can afford to forget those times?  But what we remember and the way in which we remember are important.

In our first reading this morning, the sixth century prophet Amos is issuing a warning to the people of Israel.  The Israelites had settled down in their land and were doing well. However, they had become complacent. Instead of recognising that what they had was a gift from God, they started adopting an attitude that it was theirs by right and started demanding.  This attitude was reflected in the way that they were treating others, especially those who were less well off than they were.  They were living by bribery and corruption, they were neglecting the poor and needy, keeping what they could for themselves.  The prophet Amos told them that their worship was unacceptable before God because of the way they were treating others.  If they really loved God and had a concern for him, then this love and concern would be shown in the way they were treating others, especially those less well-off, those on the edge of society….and this was certainly not the case.  From this we have those wonderful verses from Amos who passes on God’s anger towards the people of Israel:

I hate, I despise your festivals, and I take no delight in your solemn assemblies. Even though you offer me your burnt offerings and grain offerings, I will not accept them; and the offerings of well-being of your fatted animals I will not look upon. Take away from me the noise of your songs; I will not listen to the melody of your Harps. But let justice roll down like waters, and righteousness like an ever flowing stream. (5.21-24)

So, today, we remember with thanksgiving those who gave their lives in the various conflicts over the last century – and it is worth remembering that 16,000 service personnel have died since World War II.  We are not here to thank God for war.  War is never just.  War may be regarded as necessary, but when one, single innocent is killed in war, that war becomes unjust.  So we remember those who have died, thanking God for their sacrifice.  We also remember and thank their families for giving them.  We remember the parents deprived of children, the children deprived of parents. We remember, too, that it is only when we can begin to reflect their camaraderie and make heroic sacrifices in our everyday lives, sacrifices similar to those made by many in times of war, that we will find ourselves in a world where ‘justice will roll down like waters and righteousness like an everflowing stream.’

‘To our heroic fathers.’  That statue symbolises sacrifice and camaraderie and the soldier rescuing his friend with his rifle shows an instrument of death transformed into an instrument of life, a transformation which lays at the heart of the teaching of Jesus Christ.   When we remember today…..let us remember these things.